The highs and lows before leaving home and six months into their contract. 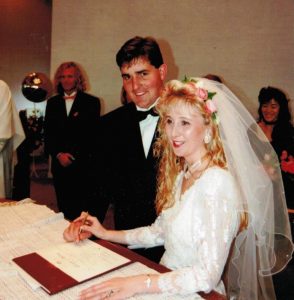 Nick: In 1994, we had just married and bought a house. We decided that there must be more to life than living paycheck to paycheck and onlybeing able to afford fish and chips once a month.

Paula: We dreamt of a little adventure before starting a family. I saw a tiny ad in the newspaper for ‘Search Associates- want to teach overseas?’ and couldn’t put the possibilities out of my mind.

Nick: Initially I wasn’t interested in going anywhere, but as usual Paula’s persistence paid off, and we went to a seminar in our hometown of Melbourne to meet with John Magagna (Founder of Search Associates).

And the Job Fair

In early January of the following year, we flew to Sydney to attend a job fair. We didn’t have much money so my parents kicked in some frequent flyer points as a Christmas present.

Paula: I was so nervous, but it was fun interviewing with Nick and after 10 interviews in 2 days, I was on a roll. We were very lucky to receive multiple job offers then and there, and another couple of offers after the fair. One meeting with a principal involved a phone interview in my nighty- the Principal rang very early in the morning!

Nick: So we had to decide between a number of different schools and locations. It was tough to decide, as there was no easily accessible information on schools or locations (as we are talking of a bygone era well before the www). Also, Paula was now having cold feet as the reality of the whole move was setting in and I had to convince her to take a chance and live a little.

Paula: In the end, Hong Kong won out, as we knew it was a stopover point and we would have more visitors from home that way. And the climate did not seem as extreme as in other cities.

Starting out in Hong Kong

Nick: And so began 10 wonderful years, teaching at the Hong Kong International School. While other new teachers used their moving allowance to actually move, we decided to indulge in a stopover at Club Med, Bali.

Paula: It was money NOT well spent as I managed to contract Bali Belly there, but Nick was quite happy, spending hours on the beach alone, enjoying the scenery! Many a German lady was taking advantage of the relaxed attitude to limited swimwear.

We were met at the Hong Kong airport by the School Principals who took us to a hotel at a very ‘local’ part of Hong Kong. I was still feeling sick and seeing various creatures in fish tanks and the unusual smells meant that we ate McDonald’s for every meal until I felt better.

Nick: We were given a 2 bedroom unfurnished apartment opposite the school. We had sent our clothes and teaching resources over, but our home was very bare for a while. Most of our weekends were spent visiting the expat leaving sales and scavenging furniture the school or neighbours were throwing out.

The first time I met the head of school’s wife- while carrying a dehumidifier from the school rubbish pile (to take home), which had leaked and made me look like I had too! Luckily there was a wonderful expat community in Hong Kong and we received many invitations to dinner and parties from our new colleagues There were also various social functions and group outings also organised by the school- hikes, sampan trips to outlying islands, theme park visits, etc. so that far from being lonely, we felt welcomed and embraced by a community that we would come to think of as our extended family.

Starting at a new school

Paula: The year we arrived in Hong Kong all 4 school campuses had moved over the summer break, which meant that furniture (covered in dust from renovations) was piled around. My building had air conditioning issues, so we shuffled furniture in 35-degree heat and 95% humidity. The toilets refused to flush; there was no drinking water and neither the fridge nor microwave worked. I often found the local laborers sleeping behind bookshelves, having exhausted themselves in the heat. I wondered what we had got ourselves into, but somehow all was ready in time for the kids’ first day.

In my first year at HKIS, I had 17 First Graders who were absolutely gorgeous and a wonderful teaching assistant, Sue who showed me the ropes. I taught the American curriculum there and taught in an open plan environment with 4 other teachers, which was a great way to learn the new system.

Nick: I taught 5th grade in the upper primary and loved going on school camps to Beijing and the New Territories. I think the students had a bit of a hard time at first coming to grips with my accent and also my sense of humour but we eventually managed to understand each other.

Paula: Our first typhoon was a little more intense than the storms back home and we couldn’t believe how much rain could fall. We taped our windows with big crosses the first few times, but were lulled into a false sense of security when nothing really happened and chose to go out in the middle of the ‘big one!’ We were trapped on the other side of the island due to landslips and had to sleep in a friend’s office until the roads were cleared. We learned that the path a typhoon travels could be very erratic.

Nick: It was great to have a constant stream of visitors, and we got to know the tourist sights very well, but we also loved the travel. We spent our first Christmas in Shenzhen, China where we had a traditional Christmas lunch, minus the ham, turkey, and plum pudding!

We explored the beaches in Thailand, eating amazing food and going to some of the many wonderful tourist attractions that Thailand had to offer- Thai kickboxing and snake shows, for example! Nick opted for the backpacker look but secretly preferred 5-star accommodation.

Discover a world of opportunity

Learn about the Melbourne Fair